As an introduction to the present cases, I invite you to watch a comprehensive video made by Nathan Bell: The Great Subliminal Message Deception

A sex embed on French actor Alain Delon when young. Click on the pictures to enlarge. 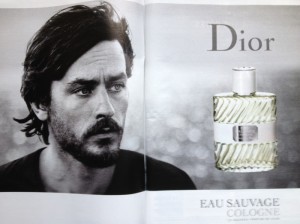 Google has designed an advertising campaign aimed at explaining that the company is supporting non-profit organizations. The present ad deals with a French organization whose purpose, as one reads, is to “teach the young good reflexes on the Web,” whatever that means. We are shown a picture where the responsible of that organization, “Thomas” (or rather, certainly, a model who represents him), meets some kids in a classroom.

The kids’ attention seems to focus on one of them, of whom the viewer only sees the back and who wears a salmon-colored jersey. He or she has blond hair. I can’t say for sure whether it’s a boy or a girl; neither the hairdo nor the clothing allows us to draw a four-square conclusion. This kid, boy or girl, points to something or someone that does not appear on the picture. The other kids look either at him/her, or at what or whom he/she is pointing to.

Thomas, on the other hand, the responsible of the Google-sponsored organization, looks at no particular place on the picture. He might be staring at some spot beyond the depicted scene, but he rather looks like someone who is watching nothing in particular. His smile is ecstatic; he just seems to be enjoying what’s going on, and enjoying it intensely.

Now, you may not have noticed it but the head of the boy/girl with the salmon jersey is between Thomas’s legs, at pelvis level. At this stage, ask yourself a question: Is this by accident? Some of you, perhaps most of you would not have noticed this incongruous, even improper perspective had I not pointed to it (in the same way that it took me some time to see it even though I was searching for tricks from the start). The conscious brain, automatically adjusting the overall picture according to perspective laws, overlooks the incongruity. However, on the subconscious level, the superimposition of the child’s head on the man’s genitals will have been recorded. The professional photographer, the art director of the advertising agency responsible for the ad, any person involved and having expertise in graphic techniques should have noticed that the perspective was not right, in fact they could not fail to notice it, and they would have modified it were their intention not to have it that way, but in fact they wanted your lizard brain to record a fellatio between a child and an adult, and they engineered the ad to that end. 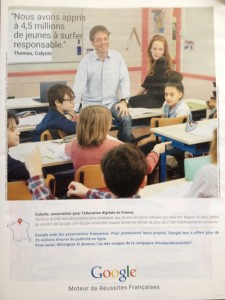 Like in Case 54, another ecstatic man. The copy reads “Do not let nature overshadow you.” It advertises garden machinery and equipment such as hedge trimmers. The picture shows a shadowy garden (where Stihl equipments have not been used) and a man having the intention to make a barbecue. He has placed the grill on the one spot where daylight is available, and is intensely enjoying the rare particles of sunlight falling in his garden, as it seems. Why he should be delighted at all is an enigma, since the copy’s message is that the barbecue is doomed for failure as no one can enjoy an outdoor dinner in such gloom. 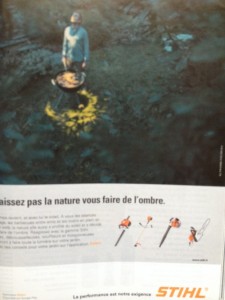 In this issue of Le Figaro Magazine there follows a few ads for wines, among several pages of articles (so-called informative content) on the wine business. Let’s begin with this masterpiece (tongue in cheek). The bottle of rosé is an unmistakable penis. The glans is clearly outlined and, true to anatomy, it is particularly sheeny: light reflections of the bottle glass are more numerous and glaring on this part. Furthermore, the graphic designer has succeeded in giving the straight bottle a somewhat curvy shape reminiscent of the penis’s curvature.

A scissors-like image gliding above the penis evokes castration fear. On the left side of the penis, at the glans’s level, is a dripping slit. This can either be a wound inflicted by the scissors, alluding to castration having been carried out, or a female vulva. On the right side is another slit, surrounded by swollen labia. I have also outlined a sex embed. 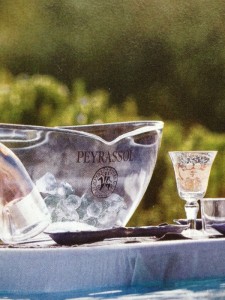 This advertisement can be found in both Le Figaro Magazine and Le Figaro Madame. The bottle of champagne wine is surrounded by whitish flower petals. Faces have been drawn among the petals, kissing and licking the penis-like bottle. On the lower side, a grotesque face expresses wonder. 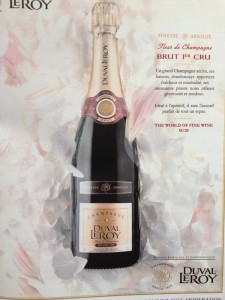 When you open this issue of Le Figaro Madame, you find the present two-page advertisement for jewellery. The advertised jewels represent amethyst and pink quartz roses with gold and diamond bees. But there is more. First of all, I don’t know which gender is the target here, man or woman; probably both are intended, women who buy jewels for themselves and men who buy jewels as gifts. I tend to opine, however, that men make gifts according to their partner’s preferences, and so would buy a Dior jewel if the lady expressed some appreciation of the brand after being exposed to such ads.

The zoomed-on jewel of the left page has been embedded with weird figures and shapes as light reflections. On the lower side (pictures 59-2 & 59-3) a grotesque man’s face has been drawn with the tongue out and erected. The man is licking what looks like a bum. This could be a depiction of metaphoric bumlicking or a sexual act.

On the upper side (pictures 59-4 & 59-5) something awful is going on. I see a woman’s face, crimson-colored (in contrast to the amethyst-colored surrounding), in profile, oriented upwards. One eye, as well as nose and mouth are visible and distinct, however anamorphic the image. I have outlined the contour only, more like a circle around the face, because I couldn’t convey with the help of a computer mouse the expression of this anamorphized visage. This expression is suffering and it could be pleasure as well, the sort of pleasure perverts look for, as encapsulated in the words “it hurts so good.” And I figure the agent of this unbearable pleasure would be the dog-like monster whose eerie face stands just behind the woman’s and which features I have been able to outline (although in a comic-like fashion). The woman is being mounted by a dog! Awful, but consistent with W. B. Key’s findings in the seventies and eighties. Nothing has changed: Only the amount of exposure to advertising has increased 900-fold (for the figures see XXVI, text in French). 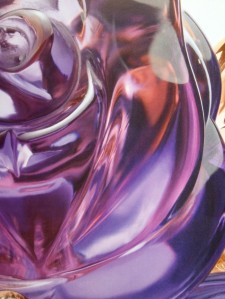 Another sex embed for good measure. Some of those embeds are so conspicuous it becomes a pleasure. Click on the pictures to enlarge.

The lady is supposedly performing some sort of dance. What dance? The position of her hands reminds one of oriental dances (Siamese, Balinese) in which hands’ gestures are codified and have symbolic meanings. These oriental dances originated in sacred dances, especially ancient Hindu dances, performed by sacred prostitutes such as devadasi (slave girls of the gods).

The woman on this ad is sternly dressed, rather like a man, so the creature here dancing is actually a hermaphrodite, which, again, speaks deeply to the onanistic woman’s psyche, because the hermaphrodite is complete per se, whereas gendered beings in order to achieve completeness must look for their other halves, according to the Platonic myth propounded in the Symposium.

Also, please note that all such ads having not a single world of copy are said to be (including by the American Supreme Court) commercial information. This is how big companies inform us.

The red splash of lipstick behind the stick evokes female genitals. The lady is looking upward, smiling, presumably to a lover. We can see her left shoulder, but we do not see the arm, so the arm must be tied to her back. She is bound.

Tapping into deviant practices makes perfect sense, again, due to the figures given on Case 61. Women who don’t experience climax in their sexual life are bound to fantasizing a lot more than men, and are likely to be asking themselves if such or such practice would not bring about the fulfillment they long for.

Tapping into weird fantasms, masochism and fear of aggression, this ad depicts a woman’s body lying on the ground. The man has taken her handbag: it must be hers because it matches her boots. So, if I understand well, the man has beaten the girl down while snatching her handbag and she’s now lying on the pavement. The man’s tattoo somehow reinforces this interpretation. Just below the benevolent lion’s head, we can see a woman, on the left, behind which, a bit blurred, are drawn two hoodies with evil stares and angry faces, one clenching his fist.

If the ad is not telling an aggression story, please explain what is going on. You can give your opinion on each post of this blog. Please feel free to correct me and bring the right interpretation of this piece of information, which does not have a single word of copy besides the name of the brand and the name of the product.