In World Premiere: Eric McLuhan says his say about subliminal messages (here), Professor Eric McLuhan talked about his class on perception and subliminals at Ontario College of Art (OCA) in the seventies.

In this correspondence he says he was using a carrousel tray of 80 slides to familiarize his students with the subject. In the mean time, he digitized this material and has been kind enough to email me some of the slides, allowing me to publish them on this blog as another world premiere.

In these slides readers interested in the topic of subliminal messages as used in our mass culture will find not only fine examples of subs’ occurrence in advertising but also a method for their research.

Prof. McLuhan’s comments on his material will appear in italics. In some cases I have allowed myself to add a few remarks.

The first slide he sent me from his carrousel has been already added to my previous World Premiere post as item nr 8 from the posters file.

Then he sent me this painting from Salvador Dali, Slave Market with the Disappearing Bust of Voltaire (1940), which, incidentally, I had already mentioned in my subliminals series (Subliminal Junk X, Case 74 here). 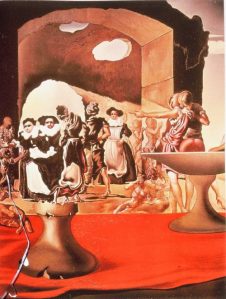 I can name at least two more Dali’s paintings in the same vein: 1/ Metamorphosis of Narcissus; & 2/ Swans Reflecting Elephants. You can google them. Also, at the small Dali Museum in Montmartre (Paris), there is an anamorphosis: A butterfly is painted which reflection on a vertical metal tube transforms into a grinning Harlequin’s face.

Then Eric McLuhan sent me the following.

I generally approach the matter of embedding from the angle of visual puns. Doing so allows the discussion to proceed minus the annoyance of moral indignation. 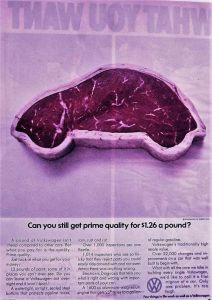 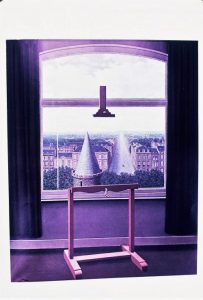 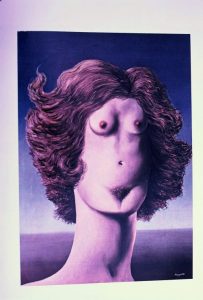 Then, the word FLY embedded in the intervals between the figures…

I find it really useful as a demo of embedding technique because the object is not presented as a figure but as a pure product of use of interval (ground) and con-figuration. 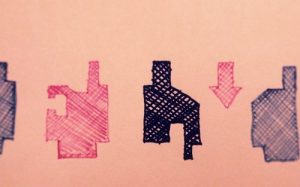 Here’s another example of embedding that uses con-figuration–that is, ground. The only elements that are to be taken literally appear in the centre strip. From a Ben Casey cartoon.

The Ben Casey exemplifies how an assemblage of disparate elements can be used to compose an image not implicit in any one of them–exactly how subliminals are constructed when a gearshift lever or a baguette serves as a penis, etc… 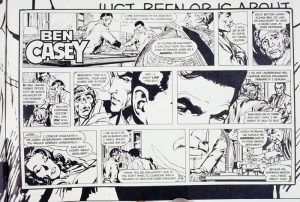 The mouth and nose of the four-square face is provided by a lamp in the bottom-right square. The bottom-left square, it’s other (rather undefined) deco elements and at the same time the chin.

I use this one, the Family Circus cartoon, to introduce the notion of the “beholder’s share” in completing the image, whether done consciously, as here, or unconsciously, as in the usual round of subliminals in ads. 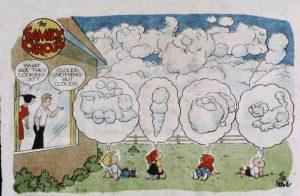 Let me close with a dandy, one of the most subtle subliminal ads ever made. For Beefeater gin.

The Beefeater ad is an excellent example of an ad designed to be ignored. As such, it does its work while the beholder is occupied elsewhere, in this case, with reading the column of print on the left. The ad itself can be grasped in a second or two at most: there is nothing there, just a few fragments of a situation. The bottle cap, the martini glass and olive and its reflection, the single word. The beholder fills in the rest and thereafter relegates the entire to the area of inattention so the ad continues to work for the next minute or two or three as he reads the print. The entire ad is subliminal. 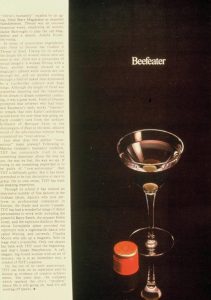 I get Eric’s point all right, yet my feeling, as I was searching for a subliminal embed, was, perhaps based on a misconstruction of the word “dandy” he used, that the picture was very appealing. I fancy some people may like to linger gazing at it. It magnifies the glass of gin as pure light on a background of unmitigated darkness. The reflections have been airbrushed to produce a vertiginous effect of infinite light-beam plays. It’s a diamond. A diamond for cheap. Real art, I would say. Abstract art. Clean, uncluttered style. It takes a lot of work to streamline an object like this, even if on paper only.

Here are a couple more from the slide tray. I think you’ll enjoy them.

The first is a fake, a send-up: I use it to set up the next two… 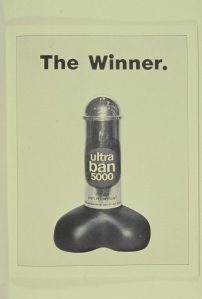 After the laughter has died down, comes this one…

From erect to flaccid. 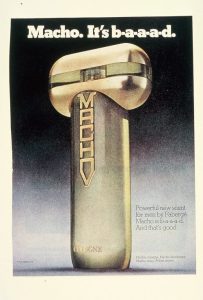 And then this one… (From Good Housekeeping, I think.)

Twinkle did several with the same theme. 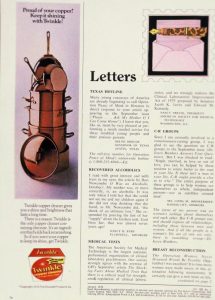 The academic reaction to my lectures on subliminals were generally, er, disappointing. Or downright dismissive, to put it mildly. Not serious scholarship. Mind you, I avoided the moral approach entirely and pursued the practise in terms of art technique and visual ambiguity. But the literati, it must be noted, have a profound distaste for puns, visual or otherwise. 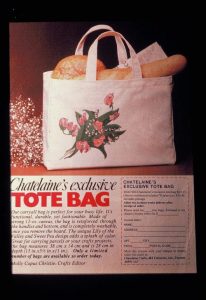 And in Chatelaine, of all places! Tsk, tsk!
The jock strap as Tote Bag–or is it vice-versa?

Variations on a theme… 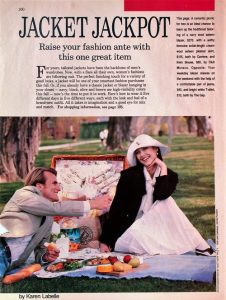 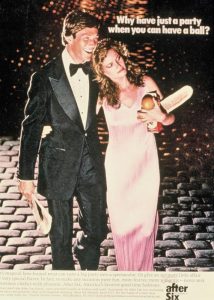 The essay to be written (or spoken) on this one is easy, and obvious…
No wedding rings
They’ve been to a party / ball
They’re going to her place
He’s focused outwardly; she, inwardly…

‘How do you know they’re going to her place, I asked. The groceries she’s holding?’

Yes, it is the fact that she is carrying the groceries, cradling the genitalia, clutching the milk to her breast, that tells the story. Normally, the gentleman would carry the bags. 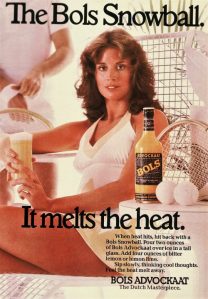 It seems even more outrageous that advertisers talked of “dirty minds,” about the very few people who voiced their suspicions, given such transparent items…

Hard to believe, isn’t it? The best way to hide something is to put it in plain sight.

Of course they say you have a dirty mind. What else can they say–unless they admit to being naughty?

Lipstick ads can usually be counted on to provide a sandbox for the embedders to play in. Here’s a rather exuberant example…

Hour after hour? And this was before Viagra and its companions. 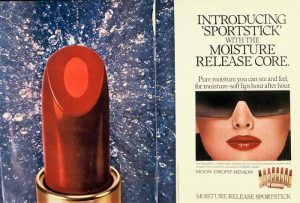 The background here again is important. Whereas on the Bols ads the figures (objects: groceries, baguette, bottle and tennis balls…) told the story, here the lipstick is, to be sure, a phallic shape, yet somewhat remotely so. It needs the “moisture” Eric is talking about to specify the effect, and it is provided by the white, marble-like veins of the background wall and their “spurt effect.” 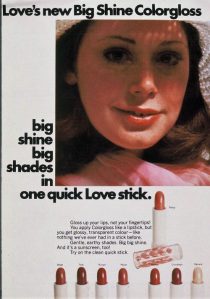 Here is the copy to consider. Meaning subliminal oral sex in the lipstick pointing toward the model’s mouth is not per se sufficient, methodologically speaking, because in any case it is the vocation of lipstick to be applied to the lips, which would make all lipstick ads subliminal. (It would be like saying everything is sexual, like Freudians: eating is a sexual pleasure [orality] etc.)

The copy is about a “big love stick.” Double entendre. The advertiser, however (an imaginary advertiser who would go beyond the ‘dirty mind’ stance), might reply that there is a dissonance in that construction, because of “quick”: doing it quick is not a favorable attribute for a “love stick”… But perhaps it is meant that the stick is quick to get hard, hence that it is a healthy stick and that once it is hard it will not be soft again before a long time… The stick is quick to be a love stick. 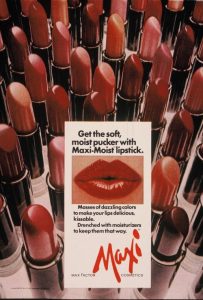 The field is rich. 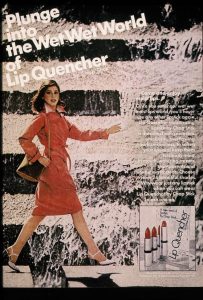 This one deserves prolonged meditation: it is loaded.

The model strides over a gap in the pavement: legs apart. Through that gap/between her legs there gushes a waterfall, a torrent of foamy liquid.

She is airborne (ecstatic?): only the very tip of one toe touches the ground.

The headline tells the reader to take a plunge. Figuratively of course as the depth of this water is an inch or less. But “take the plunge…”

Now turn to the copy for the second course.

(Remember the waterfall…)
(Pause for emphasis)
(there’s those lips again).

Then: Once you enter our wet wet moist lips   world, …

It continues,
Chap Stick is
drenched with protective emollients,
overflowing with creaminess,
to soften your lips and keep them lusciously moist.
In mouth-watering creams…

Here are two cliches from the lipstick ads. Lipsticks not only have a very useful name (lips + stick) and set of suggestive (symbolic) phallic associations, their very ubiquity and familiarity blocks the readers’ imaginations from seeing them as anything else. 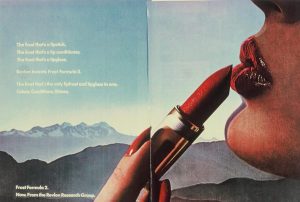 …in the inset on the right side. 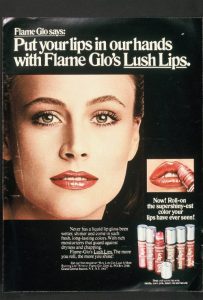 Also, there is the usual double-entendre about lips, and so on.

Check the main headline: Put your lips in our hands…

Is that a thumb? 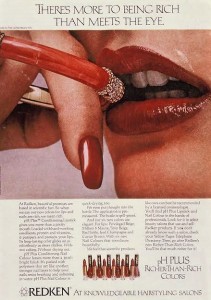 It’s amazing, the variety of contexts in which male genitalia can be used!

It’s a visual pun. Puns are the essence of our subject. 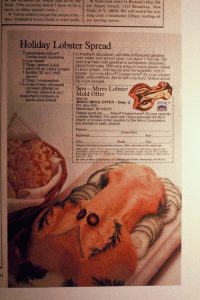 There’s a nice (and innocent, for once) subliminal embed in the top left corner, behind and just below the word, “tu”–a man’s face. 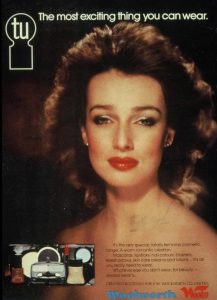 The point is, you examine the model’s expressions and demeanour, and ask, what is on her mind, what is she grooming for? The answer is there, connected to “tu”–second person (male in this case) and very singular. Her dream companion.

There is nothing naughty about this ad or the use of the subliminal (or nearly sublimninal) image since readers can easily discern the ghostly boyfriend if they pay attention. It is just a nicely-orchestrated composition.

I have my own interpretation on this one. The ‘dream companion’ is in the gloom. As I guess people will tend to look at the model, they won’t notice the face in the background. When they see it, for those who do see it, it must be startling, like a spook coming out of the dark… He looks befuddled, as if not well awoken from his eternal sleep. Or sad and melancholy: The man is a suicide. Men will die for this woman. She’s a witch. “Tu” is the informal/intimate you, but also the masterly, the superior you. The advertiser intended to convey a sense of power, magic power and power over males. That the man stands in the dark could also mean the woman will be the one who shines in that pair.

My heartfelt thanks to Eric McLuhan for sharing and commenting this material.

Then there is this.

Just remembered–the very first issue of OUI mag, in 1972, featured a brazen subliminal that might interest you, inasmuch as there was little or no recognition of it–the embed, that is. OUI was published by Playboy.

I ordered the copy and saw the embed all right. I was to take a picture of it when Prof. McLuhan sent me the picture he himself had taken and just retrieved. Here it is.

For more cases go to Index and my posts in the Subliminals Series.