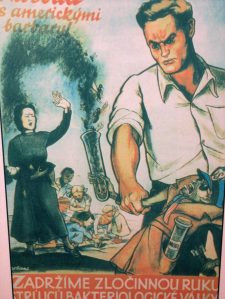 This poster I photographed at the Museum of Communism. I think the artist had a lot of fun, but apparently no one noticed. This is a piece of propaganda (or information: let me know) from Socialist Czechoslovaquia, during the war of Korea, accusing the US of using bacteriological weapons.

The group of children in the background drew my attention. The Negro boy, whose hand rests on the little blonde girl’s shoulder, is looking at her with a lecherous gaze. The Chinese girl plays at making sand castles with a pail, while the blond boy kneeling just behind her is holding her, arm stretched, by the shoulder, his face flushed and grinning. Looks like doggy-style sex! The penetration is concealed from the viewer by the dress of the grieved and indignant Korean woman. The third boy is looking at his comrade’s doing (not at the sand castles game, mind) with evident enjoyment. 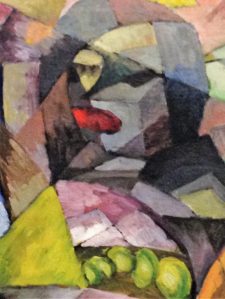 If I be not the first to have noticed that peculiar detail in Lentulov’s masterpiece, yet nothing in the material environment of the gallery drew my attention to the explicit material I would encounter while looking at the painting (no mention like “this painting contains sexually-oriented material that may be offensive to some people and not suitable for persons under the age of eighteen”). 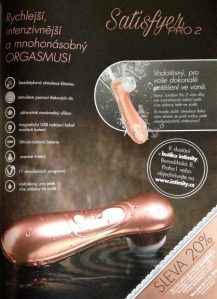 …………….The Benefits of Cannabis a la Czech

From the same women’s magazine as above, this ad for the Czech company Cannaderm’s products. [Removed]

From internet copywriting: “Cannaderm brings a new approach to skin care. Cannaderm for every age, for all skin types, even for the very sensitive skin of small children or skin with eczema, acne or psoriasis. The synergic effects of healing hemp, mutual combinability and the wide range of products guarantee the potential of putting together a cosmetic range ‘to fit’. For easier orientation the packaging is colour coded and also contains the recommended combination of products.

“Cannaderm Made in the Czech Republic. We use unique recipes, modern technology and the best quality ingredients. All our products Cannaderm are approved by the State Health Institute of the Czech Republic and are certified for sale in the EU.”

Not to omit (read “triple distilled”): 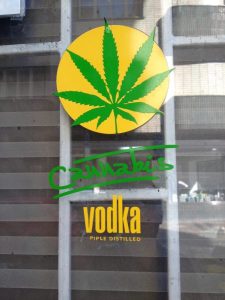 From internet copywriting: “Euphoria Cannabis Vodka is made of extra smooth grain vodka, blended with natural cannabis leaves and cannabis seeds. It is 100% natural product. Each bottle is hand-made. Enjoy the rich taste of freedom!” &

“All our dishes are served with a beer,” according to the placard at the entrance. But in the end the beer is charged. Seeing the bill, you say to yourself: “What’s the use complaining? I should have made the point clear with the waiter from the start.” However, it’s not even sure, not even likely that you would have paid the expected CZK270 for the ordered schnitzel; there must have been a trick even there, the placard probably contained a heap of qualifications in tiny fonts at the bottom, and so, after being made aware of these by the waiter, you would have had to raise from your chair and leave the place to find another one, no doubt with the same placard…

It’s just the same where I live. Most cafés and restaurants in Paris touristic arrondissements are managed by people who want to make the most of your pockets at the fastest rate: poor quality of the food, poor service, not enough space, insane prices… Many play music loud so you will feel like leaving as soon as you sit down. French cafés and restaurants see tourists as pigeons. Once I saw the following at a café near the Pantheon (allegedly a prestigious, safe place). Some Japanese tourists ordered food, the waiter asked them what they wanted to drink, they said tap water (for free) and they insisted to make him understand. He pretended not to understand and brought a water bottle that he had just opened. They had to pay for it. He even insulted them in French, to himself, but of course they understood that they were insulted and had to swallow their pride.

We all know tourism has generated those shoddy service industries that cater to the “ideal” customer, the tourist, one that will never come back, one, thus, that will never complain, returning to their countries the next day, replaced by a new wave. French cafés and restaurants don’t care what you, tourists, think of their food or of the service, they don’t even give a dime for what you think of la France: they take your money and what you get for it you’d rather pay for not having it. And don’t ask for tap water, because although it is free on the paper of which laws are made, in reality it will cost you the humiliation of your life.

You may say guidebooks are here to help prevent such bad experiences. In theory, yes, but the addresses they will give you, if they’re good restaurants, then the chances are they will be full with people from all the offices around, in their workaday formal dress, whereas you will be dressed in tourist’s attire – casually – and you will soon feel that you look like morons.

“Profiles are also worked up for work in individual companies. At Sears, Roebuck there are charts that diagram the optimum balance of qualities required. Here is the one an executive values:

“A man does not have to match this profile exactly, but it won’t help him at all if his line zigs where the chart zags. Take a man who scores considerably higher than the 10th percentile on aesthetic values, for example; such people, Sears notes, ‘accept artistic beauty and taste as a fundamental standard of life. This is not a factor which makes for executive success. … Generally, cultural considerations are not important to Sears executives, and there is evidence that such interests are detrimental to success’.”

There is much good sense in that view expressed by Sears because, as the best definition ever for culture, concise and elegant, goes, “culture is the learning of the leisure class” (Tibor Scitovsky, economist), which means that the organization man is an overworked windbag.

Interestingly enough, Whyte already was already writing in the 1950s about those corporations that claimed they were indeed willing to recruit people with literary (cultural) profile and training, yet never recruited them. I have heard this claim from today’s corporations repeated again and again – so nothing has changed and I guess the above diagram, with aesthetic taste seen as quite irrelevant, still holds for today’s organization man.

And yet, “Wu cites a 1990 study that claimed that in the US about 20 to 30 per cent of the market in New York was due to corporate collecting, and outside the city about half.” (Julian Stallabrass, Art Incorporated, 2004) Contemporary art is a reminder – the reminder that people that work are poor devils. Half the market for contemporary art made of corporate collecting: top executives adorning their offices with the excremental fantasies of slackers! Ask the connoisseur how much corporations pay artists for splashed mud and monochromes (remember, the organization men’s aesthetic acumen – his taste – approximates zero: see diagram), and compare with your own earnings!

Possible consequences: “Recently, in the Netherlands, a middle-sized bank, i.e. the DSB Bank, came into serious financial trouble for this exact same reason. Only a couple of months before, the bank had bought art for tens of millions of euros, and received a loan from another bank in order to build a museum that was to be named after the DSB bank’s CEO. These prestigious undertakings were one of the reasons that the bank had no financial reserves left when business slowed down due to the financial crisis. As a result, in September 2009 the DSB Bank was declared bankrupt.” (A.P. Buunk et al., 2011) Bankrupted because of dabbling in art.

And then there is the advertising industry, packed with artists (renegades?) and so vital to the organization man’s economic interests…