After the April issue of Vanity Fair (Cases 24-32 from Subliminal Advertising IV), I thought the May issue would be interesting too, as regards sex embeds. Several ads from the April issue are also found on the May issue, like Case 24 and Case 25, and a few others that I didn’t bother to bring forward, so the subscriptors who receive the magazine each month, or the regular buyers, are sure to get their share of repeated exposure which is the main principle of advertising as a conditioning process.

Counting pages on both issues, I find 60 pages of commercial advertising out of an overall 172 pages in the April ‘special’ issue, and 46 pages out of an overall 148 in the May issue, which makes 34,9% and 31,1% respectively (the special, bigger issue has a greater proportion of advertisements), and this does not even include the back cover ads, infomercials, advertorials, ‘Fanfairs’, ‘Hot Tracks’, ‘My Stuff’, ‘Portraits’ of commercial artists selling their last outputs, and so on and so forth.

The seven case studies presented here outline, as previously, the sex embeds. One way to get the clearest picture of what is going on is to download the photographs focusing on the embeds, outlined and not (for instance, pictures 33-2 and 33-3 below), then opening both on your computer and shifting the mouse on the lower screen bar from one to the other, so that my delineation of the embed will project on the photograph and then leave it again according to the mouse’s movement, the photograph staying in place, as one is only the duplicate of the other plus the embeds outlined. This procedure will make the embeds obvious to the most impercipient, I believe.

Of course, if you don’t wish to download anything, it always helps to enlarge the pics by clicking on them, or even by enlarging the internet window through command ‘Ctrl plus +’ (press Ctrl and + at the same time, as many times as you want the window enlarged).

All this research on sex embeds doesn’t imply I am convinced they have potent effects or even have effects at all. However, even if the effect is unsure, as the technique costs little — or rather nothing since the graphic designer’s working time is compensated anyway and it makes no difference whether he or she’s adding shades or sparks or droplets or sex embeds — it seems that advertisers believe they ought to use the technique, and they do use it.

One final thought before the case studies. If advertising, as its advocates claim, is so important for our economy, then what a vibrant homage it is to artists, those (in the view of a few people who look at themselves as practical minds) ‘losers’! People working on ads have artistic training. At a time when middle management, even top management, is being increasingly performed by computers, and experts are being increasingly replaced by expert systems, i.e. computers, human artists are still needed to perform that part of the economy whose global revenues in 2010 amounted to 503 billion dollars worldwide (Shaver & An, Ed., The Global Advertising Regulation Handbook, 2014). Parents that discourage their kids’ artistic inclinations seem very injudicious to me, even according to their own materialistic standards, because kids may end up earning far much more working for advertising agencies than as accountants. In any case, what the advocates of advertisement’s claim amounts to is that our economy needs the artist more than the organization man, whose function is being automatized and computerized.

The lady is waiting on a pier with an extravagant profusion of luggage. The sex embed is on her boots. The signal on the tip of the pier reads ‘Privé Private Please.’ ‘Privé’ is the French for ‘private.’ The signal is pretty meaningless as such : Please what? But a private pier conveys the idea of VIP-ness, and the advertisement as a whole the idea that very important persons consume very much. 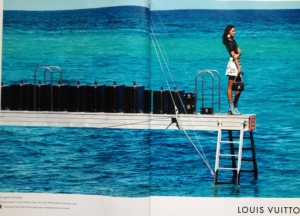 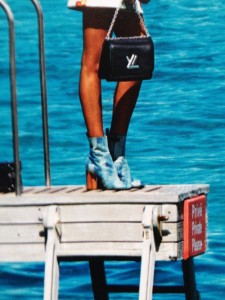 The borderline between hair and forehead, with all its underbrush, is a convenient place to embed SEXes à gogo. We have a real sex jungle here. 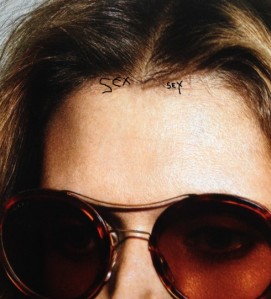 The expensive champagne brand Dom Perignon uses no color on this one, expect golden letters for the brand name. The word sex is embedded on the stylized sea spray. The X is frankly neat and obvious as a white relief on this piece of commercial relievo.

Like in Case 15 (here), the word sex is embedded as a reflection on the sunglasses. Such reflections are typical background elements to which no attention is paid, even if geometrically speaking they are not in the background at all (since they are even closer to the viewer than the face itself, the glasses protruding from the forehead). 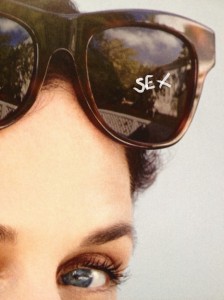 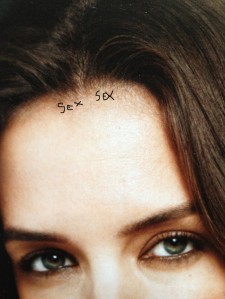 Another case of sunglass reflections sex embedding. The difference with Case 35, however, is that the reflections on the latter are saturated: many objects, some sort of posh villa with greenwood trees, can be seen as reflections, among which the word sex has been embedded, whereas in the present case the apparent reflection is only that of a flat surface like the sea or a beach or a sand desert, and the sky. The word sex is embedded on this emptiness. I have outlined two different, partially overlapping embeds (37-3 and 37-4).

This one is my favorite from the lot and I will take a few minutes to explain why. First of all it uses celebrity endorsement, the woman there being the famous actress Nicole Kidman. Celebrity endorsement is described by D. Lakhani as subliminal advertising (according to Shakeel Ahmad Sofi, 2014, an Indian scholar who has studied the effects of these kinds of ads on a sample population of Kashmiri students), because one is induced to purchase a product upon motivations that have nothing to do with the product’s characteristics. This is stretching the meaning of ‘subliminal’ very much, for, although people like to say they buy products due to the latter’s intrinsic qualities, marketers know consumers should not be taken too seriously in that respect. Marketers also know celebrity endorsement sells well.

For women, the endorsement here triggers identification, I suppose. For men, it triggers plain sexual arousal in an extravagantly gross fashion. Shoes off, on her couch or bed inside the aircraft cabin, wearing a somewhat creased evening dress (it’s really bed time), Nicole Kidman is looking at you in the eyes. Furthermore there is the name Etihad in Arabic, no doubt a ‘marker’; in the same way as Audi’s international slogan Vorsprung durch Technik relies on the psychological ‘marker’ (be the fact true or not) of uncompromisingly reliable German technology (the idea of keeping the German language was the British agency BBH’s by the way: see R. Heath 2012), Arabic calligraphy evokes (be the facts true or not) Gulf oil wells and luxury and harem mysteries, so the male viewer is transported in a fantasy where he is a desert sheikh and the Hollywood star a sex slave from his harem, and the grossness of the sexual overtone (hardly an innuendo) becomes irresistible.

In such a context I was expecting the embeds to be rather shy, for two reasons. First, with due respect to the endorsing celebrity. Second, because the clients (Etihad) being desert sheikhs and outdoor Puritans*, they could miss the humor and jocularity of sex-embedding, as, for instance, capital punishment is still, in a spectacular fashion, in vigor among them (through fire squads, which is not as picturesque, however, as in neighboring Saudi Arabia, where beheading fairs are performed). These two factors would dampen, I conjectured, the artist’s embedding mania.

*(When I use the phrase ‘outdoor Puritans’, I do not mean these people are hypocrites. What occurs behind doors is no great secret among them, I should think. However, many Westerners will call these mores hypocritical, as repressed monogamists and ‘zerogamists’ carpet-bombed with mass media sexual fantasies are expected to do.)

The embeds are shy indeed; they almost seem to apologize for being there. But they are there anyway. One of them lies on a white pillow, as an arabesque of slight shades and folds. Others are on the couch, whose cover’s velvety fabric provides the milieu for the embed culture. I have outlined only a few of these.

Post Scriptum. As I find the same ad in the German magazine Der Spiegel (same month), it’s likely it appears in most journals of significance throughout the world. The price of such a global campaign (including NK’s compensation, and payment for advertising space on dozens of the most expensive media) must be enormous. Needless to say it is paid by the consumer: marketing costs are included in the final price. 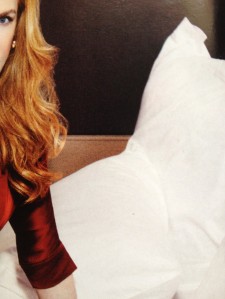 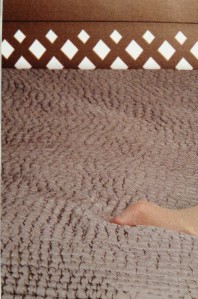 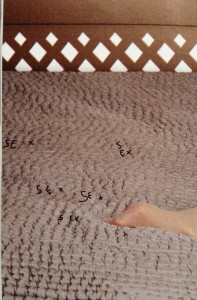